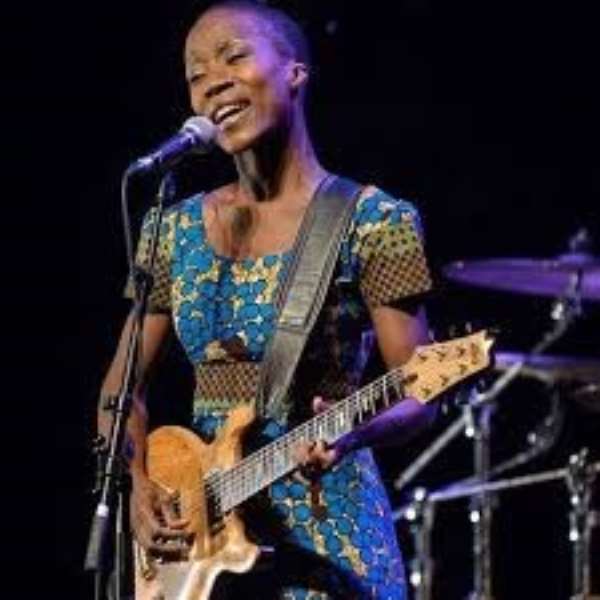 Although this case is a private matter and must remain so, it has become political and it is only in this regard that I express a view. It reflects the political, legal and symbolic relations between Africa and the rest of the world.

Felwine Sarr, Senegalese economist and musician, Co-author with Bénédicte Savoir of the Sarr-Savoy report on restitution.

We publish below a petition in English and French addressed to the Belgian authorities requesting the lifting of the international arrest warrant that led to the arrest of the famous Malian musician, Rokia Traoré, in transit in Paris, France, whilst she was preparing to fly to Belgium on 10 March in response to a summons in connection with a child custody case.

Without wanting in any way to enter into the complexities of French or Belgian law, we must express our utter surprise that a mother can be arrested and imprisoned in such a child custody case. Since the 5 years old daughter of Rokia has been living with her in Mali since she was 4 months old, we would have thought that Malian courts would, on the face of the facts, have jurisdiction over custody of the child and not a Belgian court, presumably on the basis of the nationality or residence of the father who is Belgian. Indeed, a Malian court had examined the case and awarded custody to Rokia, with visiting rights for the father. The father got a Belgian court to award him custody of the child even though he has not been contributing to the upkeep of the child. It seems a father retains her parental rights even if he neglects parental duties.

We can also not hide our feelings and impression that if Rokia had been a white woman, a famous American or European singer, the Belgian court would not have issued a warrant for her arrest and the French authorities would not have arrested her on her way to Belgium. We also know that between an African and European disputant, European judges tend to believe that the welfare of the child is better served by her staying with the European, without looking into the particular circumstances of the parties involved. Not all Europeans live better than all Africans nor can one assume that life for a child who has lived in Mali since birth with the mother, a famous African singer, would be better off in racist Europe. She is likely to meet racist experiences she would never forget.

Most shocking of all is that in this period of a devastating epidemy, where most activities have ceased and air-companies are not flying to many States, the African singer has been thrown into a French jail where infection with the life-threatening virus cannot be excluded. Parents, brothers, sisters and other relatives of Rokia cannot travel at the moment to either France or Belgium to give her moral support in her hour of great need. Her fans, including this writer, are thus deprived of the possibility to visit their heroine in her difficult time. How well can she prepare her case with her lawyer if she is kept imprisoned under such circumstances?

Mali and other African States should protest at this mishandling of an African musician who is a symbol of our continent and its vibrant cultures. Our sister must be able to rely on our States that proclaim their attachment to our musical and other cultural traditions.

The French and Belgian authorities are no doubt fully aware of the responsibility they bear should something happen to this famous daughter of Africa.

We ask the investigating judge in charge of Mrs Rokia Traoré’s case to lift the international arrest warrant against her so that she can defend herself before Belgian justice.

On October 30, 2019, an arrest warrant (red flag) was issued by Belgian justice against Rokia Traoré for kidnapping, forcible confinement and hostage-taking. She was arrested and then incarcerated in France for the first time on November 25, 2019. She was arrested and then incarcerated again since March 10, 2020. Mrs Traoré, a Malian national, is living with her daughter in Mali since the girl was 4 months old. The father never having come forward to obtain any custody, suddenly decides to take legal action while the mother had never opposed any visit from him. However, Ms Traoré has spoken to him of sexual touching, following what her four-year-old daughter told her. Belgian justice takes no account of the Malian court decision which grants custody to the mother or the living conditions of the child.

Mrs Traoré takes care of her daughter and offers her the best conditions of schooling and education, despite the fact that the father explains that he is not being able to contribute financially to the life of his child. Ms Traoré cannot, for financial and professional reasons, appear at all hearings before Belgian justice but makes sure she is represented by a lawyer. Mrs Traoré had a hearing scheduled for March 10, 2020, and during which she can appeal the latest decision granting exclusive custody rights to her ex-partner. To do this, she travelled to Belgium with a stop-over in Paris. The Brussels investigating judge agreed to lift the arrest warrant against her in order for her to be able to attend the hearing, on the sole condition of presenting the child to the father.

Mrs Traoré was arrested at the stop-over in Paris.

The Collectif des Mères Veilleuses is a group of single mothers in Belgium.

We request the immediate release of Mrs Rokia Traoré.

Mrs Traoré has been on hunger strike for several days.

The story of Mrs RokiaTraoré demonstrates the dysfunctions of Belgian justice with regard to single mothers. These dysfunctions are all the more discriminating when the mother is of non-EU origin, in other words, “racialized”. Indeed, Mrs Traoré’s story shows that an absent father, who does not contribute financially to the child’s needs, retains his parental rights. He can at any time go to court and have the child removed from the person who has assumed all the emotional, educational and financial duty towards the child. Furthermore, it is an aberration that Mrs Traoré undergoes what is called “Mother Shaming” on the part of Belgian justice because she has an international career as an artist. This same argument is not used against her ex-partner who is absent two weeks a month travelling abroad for work which does not seem to be an obstacle for sole custody under Belgian jurisdiction.

Single mothers are continually held responsible for fathers’ disinterest and divestment from their children. The story of Mrs Traoré shows how mothers are singled out: their testimony is questioned, until the children are, one day, able to express themselves on facts as serious as violence or sexual assault they have suffered. Justice should be protective of the victims. When in doubt, the justice system should, before imprisoning the mother, investigate and make arrangements to protect the children. Imprisonment is a trauma not only for the mother but also for the child.

Belgian justice remains extremely sexist. Family law seeks at all costs and despite common sense to establish false equality between the two separated parents. We know that the vast majority of single-parent families are made up of single mothers with children. We also know that in very many cases, fathers only claim custody to harm the mother or to avoid payment of a maintenance contribution, without any real desire to take care of the child. Justice cannot enter into the game of a father who instrumentalizes a child in order to take revenge on his ex-partner. This is too often the case. And this is precisely the situation that Mrs. Rokia Traore is experiencing. Criminal law and international arrest warrants should serve to protect society from dangerous and harmful people, the perverts who go to Africa to abuse children, for example. Deviating criminal justice from this function to deprive a mother of her liberty is a dangerous drift.

One can also legitimately ask the question of racism. Would the court decision have been the same if the father was not Belgian and the mother was not Malian? There may not be a definite answer to this question, but it must be recognized that prejudice against Africans exists and influences justice.

– Belgian justice lift the international arrest warrant filed against Mrs. Rokia Traoré, so that she can appear before the Belgian court of first instance and can defend herself;

– That her supporting documents can be registered and considered by Belgian justice;

– That Malian law in terms of childcare can be considered by Belgian justice;

– That the testimony of her daughter can be supported by the diagnosis of a child psychiatrist expert specializing in incest; –

That arrangements be made so that the father if he wishes to be in contact with his child, can see his daughter under surveillance in a parent-child meeting space;

– That if the touching events have been proven, the father is refused all parental and visiting authority, in the interest of the well-being of the child.

Fatma Karali started this petition to Justice belge and 1 other